Is The Occupy Movement The Counterculture Of The New Millennium? This past summer of 2011, on a trip to Sacramento, I decided to head to the coast for a little sight seeing. I drove to the north side of the Golden Gate bridge, then headed through San Francisco.

I have always had an interest in the cultural changes that took place during the Sixties. With that in mind, I thought that a return trip through Berkeley was in order.

I drove along Telegraph Avenue towards the UC-Berkeley campus. A turn to the right and I was driving past People’s Park, site of the Bloody Thursday protest in 1969. That was the fateful day when Governor Ronald Reagan declared a “state of extreme emergency” and sent in 2,000 National Guard troops. Why? The 3,000 to 6,000 activists who did not want People’s Park to be destroyed.

For many, People’s Park was the epicenter of the counterculture. Now, it is a husk of its former self.

Fast forward 42 years - to 2011. Students have set up camp at Zuccotti Park in New York City to protest Wall Street. But that’s not the only protest. Imagine a peaceful sit-in on the campus of UC-Davis that was met with a barrage of pepper spray. The responses to the Occupy protests are growing more violent.

The ideological roots to Occupy Wall Street run deep and wide. Has the counterculture found its way to the new millennium?

As I drove past People’s Park, I was reminded of what the Sixties looked like. It was, in many regards, just like stepping back 40 or so years. 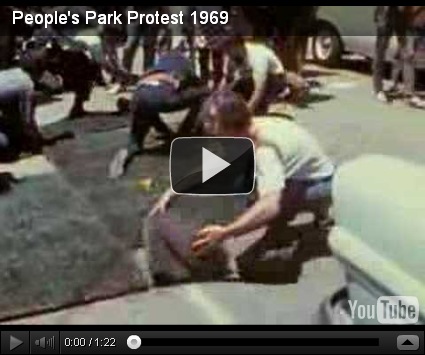 In the Sixties, there was social unrest. There were many issues at stake: civil rights, race relations, women’s rights, the Vietnam War. There were many differing interpretations of the American Dream. Student activists fought to exercise their Constitutional rights like freedom of speech and freedom of assembly. Within all of that, you had Berkeley, Kent State University, Jackson State University, and a host of other locales where activists stood up for a different view of the world.

Now, in 2011, you have UC-Davis, Zuccotti Park, and countless Occupy sites across the nation. Now, you have social unrest -  again. You have many issues at stake: Wall Street, the ever-broadening gap between the haves and have-nots, the wars in Iraq and Afghanistan (and the costs imposed by them, both human and economic). And, imagine this, you still have some differing interpretations of the American Dream. One wonders how many people can even conceptualize an idea like the American Dream anymore.

When I first saw the video from UC-Davis, my mind went back to the Sixties. For a brief yet painful moment, it was like we’d gone back in time. 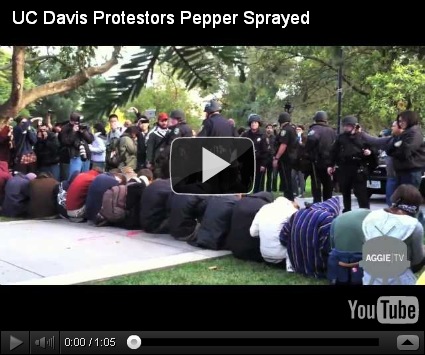 Maybe the counterculture has returned. Maybe people are willing to speak up again, ready to exercise their rights to freedom of speech and freedom of assembly in order to promote a different view of the world. Maybe the response to it from conservative media sources is just an echo of the late Sixties.

Power To The People.